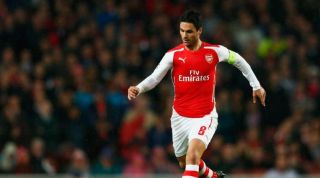 It was feared the Spaniard would be facing a long spell on the sidelines, and Wenger revealed that the former Everton man will be unavailable for at least two to three weeks.

Walcott sustained a groin problem on international duty with England, while Danny Welbeck (knee) will be assessed ahead of the encounter with West Brom.

Goalkeeper Wojciech Szczesny (hip) has not yet returned to training, while Yaya Sanogo (hamstring) is also an injury concern.

Wilshere has been plagued by injuries since breaking into the first team, but Wenger expects the 22-year-old to fulfil his potential.

"His injury is a consequence of a very bad tackle that was not malicious." said the Frenchman.

"He deals very well with tackles and kicks but nobody would've dealt with that tackle.

"We knew he would have surgery. He's focused to come back and finish the season well.

"He's very down. Jack is a football man. He loves the game. He has learnt to deal with adversity at a very young age."

When asked whether injuries could prevent Wilshere from reaching his full potential, Wenger said: "I was more worried one year ago than I am today.

"If he has no problems with his joints he will make a massive career."