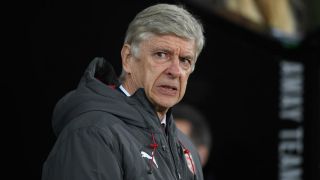 Arsene Wenger is nothing if not defiant. He has faced down fan protests and aeroplanes with banners; he's refused to compromise on his attacking football principles; he prides himself on giving youth a chance. It even took him the best part of 20 years to try a back three.

Just a week ago, that same quality was evident as he was peppered with questions about a club-record deal for Pierre-Emerick Aubameyang, how he would fit Henrikh Mkhitaryan in the team and whether Mesut Ozil would stay. Predictably, he talked about youngsters, about the importance of the longer term, about a sense of identity over money.

"It's important that we keep the basis of our focus, which is getting people from inside the club," he said. "The way football is going is not necessarily to buy players for a huge amount of money, but to have players who care about your club, and have a sense of belonging. I would rather encourage the club to push more the quality of our youth work, rather than going in a way where it's not all about millions, and not so much about values."

What a difference a week makes. Wenger has turned his own transfer policy on its head. Aubameyang is in, a £56million deal done. Mkhitaryan is growing accustomed to his new surroundings and is well ahead of the Gunners' young talent in the pecking order. Now Ozil, after months of uncertainty, is said to have signed a new contract that smashes the glass ceiling of Arsenal's wage structure, with £350,000 a week going the German's way.

There can be no doubt about it: Wenger is taking a stand again. He's embraced those murky "millions" and signed two players of 28 or over in the same window for the first time in six years. The master builder of future dynasties has his eyes squarely on the short term.

This is good news for Arsenal, of course. They will emerge from the transfer window stronger than they started it, despite losing Alexis Sanchez to Manchester United. But it's cost Wenger his principles and he has nowhere to hide if it doesn't work.

Mkhitaryan is 29, as is Ozil. Aubameyang will be in June. By the time Wenger's contract runs out next year, Arsenal's best players will be approaching 30, or be the wrong side of it. This is about winning, and winning now, before his storied career comes to an end. "Values" be damned; those young Gunners breaking into the team can be the next manager's priority.

Wenger has hidden behind complaints about his rivals' spending power for far too long. Three FA Cup wins in four years is admirable, yes, but abject European campaigns and Premier League title charges that end in November are not. Arsenal's new attacking triumvirate, alongside previous record signing Alexandre Lacazette, has been assembled to change all that.

With perhaps only 18 months left at the Emirates Stadium, that costly ground that held Arsenal back in the market for so long, Wenger has swapped sustainability for expediency. The silverware the fans crave, the kind that Sanchez left to pursue, simply has to follow. There can be no more angry muttering about budgets elsewhere in London or Manchester, or outlandish contract demands, and certainly no more horrible 3-1 defeats of the kind they suffered at Swansea City on Tuesday.

Lacazette, Mkhitaryan, Aubayemang and Ozil must herald an era – however short – that rivals the very best Wenger has overseen. If they don't, Arsenal's LMAO will be the last cruel joke at Wenger's expense.