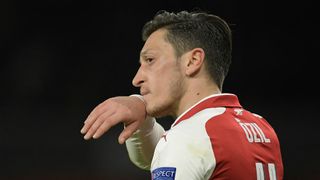 Ozil has worn 11 since joining the club and switches to 10 following the departure of Jack Wilshere.

Robin van Persie and Paul Merson are among the other Arsenal stars to have worn the number 10 in the modern era.

But it is a French football icon that Ozil had in mind when opting for a new number.

"It has never been a secret how special this number is to me," Ozil told Arsenal's website.

"My childhood idol Zinedine Zidane wore this number and it is still the most characteristic one for the playmaker position.

"I'm looking forward to putting it on for the first time at Arsenal after the summer break!"

Arsenal confirmed fans who bought shirts with Ozil and 11 on the back for the 2018-19 will be given replacements.