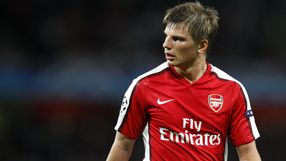 The October 10 clash at Moscow's Luzhniki Stadium is considered a 'do or die' clash for both sides seeking top spot and automatic qualification for next summer's showpiece in South Africa.

And Arshavin, who has been troubled by both groin and knee niggles in recent weeks, has emphasised the importance of the meeting between the two countries, but revealed that he is still not 100 percent fit.

"Of course, my partners in the national team talk a lot about our game against Germany and everybody wants to take part in it," he told Sport Express.

"The coming match between Arsenal and Blackburn is important for me as preparation for the clash with Germany. My knee is causing me some problems at the moment.

"Our main target for October 10 will be to enjoy our football and pick up a good result."