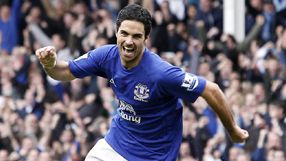 The 28-year-old recently put pen to paper on a five-year extension at the club, but he is not content with their current ambitions of qualifying for the Europa League.

“Players all want to win trophies. That’s how we live on when we’re retired. I think winning trophies would make a massive difference to everyone.

“We are able to win something, but it’s not good enough just competing at the highest level for five or six months, we need to be able to do it for eight or nine.

“The ambition from the start of the season was to get a European spot, so there is some hard work to do. When you started the way we started, it’s so hard to catch up again.”

The Spanish midfielder also revealed that he would “really consider” a call-up to the England squad, should Fabio Capello ever require his services.

He now qualifies for UK citizenship, having lived in England since 2005 and never been capped by his own country.

And despite blossoming in the Premier League, Arteta acknowledges it would be difficult to break into Spain’s midfield, so he is keeping his options open.

“If you look at the way Spain have been playing, winning the European Cup and World Cup, it is very difficult at the moment.

“I would love to play [for Spain]. I enjoy playing alongside those players, but as I said, at the moment they’ve got some terrific players and it’s so hard to get in there."

Reports have suggested that Arteta can never represent England, as he would have needed to own a British passport at the time when he played for Spain at the U16 European Championships and had five years of education in Britain prior to his 18th birthday.

Listen to Blackpool vs Everton on Absolute Radio extra - on DAB Digital Radio, 1215AM and online in the UK from 1.30pm on Saturday. Tune in to listen to the full Mikel Arteta interview. For more go to www.absoluteradio.co.uk/extra