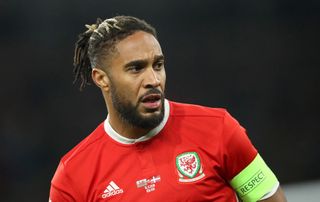 Ashley Williams insists he has a big part to play in helping Wales reach next summer’s European Championship.

Williams remains Wales’ captain and is his country’s fourth most capped player with 86 appearances.

But he 35-year-old has started only one of Wales’ six Euro 2020 qualifiers, with Chris Mepham, Joe Rodon and Tom Lockyer seemingly above him in the pecking order of central defenders.

Swansea starlet Rodon will miss the decisive qualifiers against Azerbaijan and Hungary after undergoing ankle surgery, while Mepham has not seen first-team action at Bournemouth since September 25.

Williams, released by Everton last summer, began the season without a club, but he joined Bristol City in August and has been an influential figure in their rise into the Sky Bet Championship play-off places.

The Robins have lost only once in Williams’ 10 games and the veteran boosted hopes of a Wales recall in Azerbaijan by shutting out Cardiff in Bristol City’s 1-0 Severnside derby win on Sunday.

“I’m just doing what I’m doing and the main thing for me is that I’m playing at Bristol and playing well,” Williams told the PA news agency at a McDonald’s Fun Football Session in Cardiff.

“That’s my main focus and then it’s on the gaffer (Ryan Giggs) whatever teams he picks.

“I was disappointed not to play against Slovakia and Croatia (last month), but my form is good. If I feel like I should play then the manager will know that.

“Of course it’s down to him whether I play or not and that’s fine. It’s not a big situation.

“But he knows that I am playing well and want to play.”

Williams says he will consider his international future at the end of the Euro 2020 campaign.

He hopes to be part of an exciting chapter in Welsh football before that, with Giggs’ side needing to win their final two games to keep alive automatic qualification hopes.

Even if they drop points – or Slovakia deny them by winning their final two games, one of which is away to group leaders Croatia – Wales should make the Euro 2020 play-offs in March.

“When I look back on my Wales career these are the camps and the games that are special,” Williams said.

“The Hungary game in Cardiff will be incredible if we can win in Azerbaijan.

“I hope I’m wrong, but you can almost guarantee that the Azerbaijan game is not going to be a pretty affair.

“I remember going there many years ago when we won 1-0 with a Dave Edwards goal. It’s a tricky place to get to with a long flight and it wasn’t much fun.

“But that’s the challenge of international football and hopefully we’ve got enough experience in the squad to manage a situation like that.”

Wales were boosted on Monday as Real Madrid forward Gareth Bale trained with the rest of the squad.

Bale has not played since suffering a calf injury during Wales’ 1-1 draw against Croatia on October 13, continuing his rehabilitation away from the main Real group in recent weeks.

:: Ashley Williams was speaking at one of McDonald’s Fun Football Sessions, which introduces kids to the game for their first time. Sign up today and start your child’s football journey – mcdonalds.co.uk/funfootball