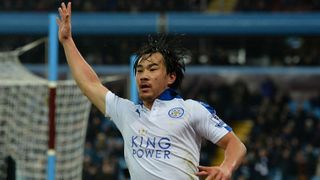 Substitute Rudy Gestede snatched a point for bottom club Aston Villa against Leicester City, who edged back to the top of the Premier League table with a 1-1 draw.

Shinji Okazaki broke the deadlock after 28 minutes when the goal decision system confirmed his close-range effort was over the line despite the best efforts of Villa goalkeeper Mark Bunn.

Riyad Mahrez had a first-half penalty saved by Bunn and Villa, aiming to build on their first league win since the opening day of the season against Crystal Palace in midweek, improved considerably after the break.

Amid suspicions of handball, Gestede got the better of Robert Huth – City's matchwinner at Tottenham on Wednesday but an unconvincing defensive presence here – and crashed home 15 minutes from time.

Leicester edge a point above Manchester City and Arsenal at the summit but will cede that position if Arsene Wenger's men avoid defeat at Stoke City on Sunday, while Villa are six points adrift at the foot of the table and nine from safety.

Both teams named unchanged XIs, meaning Villa captain Micah Richards had to be content with a place on the bench after shaking off an ankle problem.

Bunn's next involvement came when he charged out of his area towards the left channel and clattered Vardy - whose pace was already troubling the Villa defence – to earn a 14th-minute yellow card.

Villa performed fitfully during the opening stages but were almost gifted a 20th-minute opener as Huth's dreadful backpass was seized upon by Libor Kozak but Kasper Schmeichel saved at his near post.

Schmeichel was involved when his team broke through as his goal-kick released Vardy - the striker's lofted effort was superbly saved by Bunn but the Villa keeper was recovering behind his line when Okazaki blasted the rebound at him to scrappily open the scoring.

Five minutes on from those attempted heroics, Villa were indebted to Bunn for keeping out Mahrez's penalty after Aly Cissokho's handball from the winger's more convincingly struck goalbound shot.

Cissokho was involved at the other end seven minutes into the second half as he collected Ashley Westwood's backheel to clatter a shot at Schmeichel.

Villa penalty shouts fell on deaf ears after an hour when Huth caught Kozak with a flailing arm – Garde remaining in dialogue with the fourth official as the forward gingerly returned to his feet.

Jordan Ayew skipped down the Leicester left after 66 minutes only for Leandro Bacuna to side-foot too close to Schmeichel.

The visitors retained their threat on the break and Vardy was driven wide by the ever-alert Bunn, the England man's eventual cross prodded wide by Danny Drinkwater.

They would regret spurning such a chance when Gestede bundled past Huth, the ball striking his hand, and rifled into the top corner via a deflection off the sliding Wes Morgan.

Kozak and Vardy – who was booked along with Bacuna for a heated late confrontation – both blazed late chances over the bar and Villa could reflect on the most encouraging week yet of a dire season.

- Shinji Okazaki has now scored five goals for Leicester City in all competitions, all of them coming away from home.
- The Foxes have now been top of the Premier League table for 33 days this season, the same number of days that Spurs have been top of the PL table since its inception in 1992 (based on end of days).
- Rudy Gestede scored his first Premier League goal in 10 appearances for Aston Villa at Villa Park.
- Aston Villa have seen a substitute score on just three occasions in the Premier League since September 22nd 2013 – two of those have been scored by Gestede.
- The Foxes’ run of six hours and 11 minutes without conceding a Premier League goal was ended by Gestede’s goal.