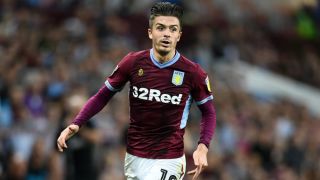 Villa went into the game on the back of defeats to Norwich City and QPR, but Bolton – without a win since the end of September – rarely looked like making it three straight losses for the hosts.

Before the match Smith urged Jack Grealish to make more of a difference around the opposition goal, and the midfielder quickly heeded that advice.

Grealish put Villa ahead in the fourth minute, latching on to Tammy Abraham's pass and slotting home after skipping past Bolton goalkeeper Ben Alnwick.

Abraham was otherwise wasteful and Bolton nearly punished him in the 24th minute, but James Chester somehow cleared Jack Hobbs' header off the line.

The Villa captain was decisive at the other end just before the hour, heading in Grealish's free-kick to effectively put the game beyond Bolton.

Villa, temporarily at least, moved up to 13th in the Championship, while Bolton could find themselves just one point clear of the relegation zone if results go against them this weekend.

FT: 2-0 and James Chester goals seal all three points at Villa Park. We're back to winning ways as Dean Smith maintains his 100% record in front of the home fans. A week's preparation now, then we're at next weekend.November 2, 2018