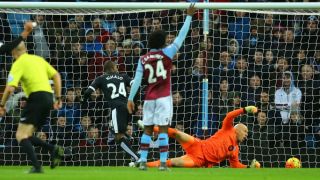 Aston Villa's Premier League woes continued with a 3-2 defeat to Watford despite a late fightback at Villa Park.

Odion Ighalo had given the visitors the lead after 17 minutes, converting a loose ball after Villa had failed to clear their lines on several occasions.

But the hosts hit back just before half-time with skipper Micah Richards heading in a free-kick to ensure the scores were level at the break.

Villa's defence always looked likely to make a mistake and a hapless Alan Hutton turned into his own net when Ighalo looked set to score again.

The match was marred by a serious injury to Watford goalkeeper Heurelho Gomes, who received oxygen on the pitch and was stretchered off after being caught in the head, with 10 minutes of added time played as a result.

In-form Deeney, who now has four goals in five Premier League outings, looked menacing from the off and fired narrowly over before Ayew showed his intention by drilling in a low shot that drew Gomes into a fine stop.

Villa could only look at themselves as they fell behind, failing to clear after Brad Guzan denied Ighalo, allowing the Nigeria striker to tuck in his eighth goal of the season.

The hosts should have been level almost immediately. A corner was recycled to Jordan Veretout, whose shot fell at Ayew's feet, but somehow he missed from inside the six-yard box and Etienne Capoue ought to have compounded the miss, but he could only shoot straight at Brad Guzan when one-on-one.

A tricky run from Scott Sinclair created an opening but Guzan saved his curling effort before Ciaran Clark stabbed wide at the far post when Ayew flicked on Veretout's low corner.

Villa's mounting pressure told when Richards headed in the equaliser five minutes before the break. Veretout floated a free-kick perfectly for the Villa captain to power in his first goal for the club, although he looked just offside.

Quique Sanchez Flores had to replace his goalkeeper 15 minutes after the break when Gomes was caught in the head by Craig Cathcart's shin, with Giedrius Arlauskis coming on to make his Premier League debut in his place.

Shortly after the restart Watford retook the lead. Deeney slipped in Ighalo, with the covering Hutton diverting the ball into his own net beyond Guzan.

And Deeney realised his dream of scoring against Villa in front of the Holte End when he showed fantastic desire to get up to power a header past Guzan with a few minutes remaining.

Ayew gave Villa hope of coming back to earn a point by smashing home a wonderful strike, but the Villans' dire run now stretches to 13 winless Premier League matches, already leaving them seven points off safety.