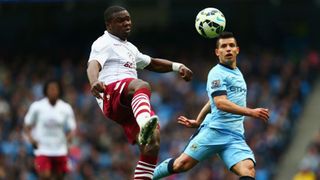 Aston Villa defender Jores Okore says a positive result in Saturday's FA Cup fourth-round clash with Manchester City can be a catalyst in their bid to avoid Premier League relegation.

Remi Garde's men are six points adrift at the foot of the table and needed a replay to get past League Two side Wycombe Wanderers in the third round.

While Villa are now five matches unbeaten in all competitions, their improvement will be tested by a City side full of confidence after reaching the final of the League Cup at the expense of Everton on Wednesday.

Villa were finalists in the FA Cup last year, as Tim Sherwood steered the club away from the drop zone in his first few months in charge.

And while the former Tottenham manager was dismissed in October, Okore believes success in the knockout competition can trigger improvement in the league again this season.

"We need to go out and keep that run going. As long as we create chances we can go out and win," he told Villa's official website.

"Last season's run to the final was really special. It was amazing to go to Wembley and go that far in a tournament with some quality teams.

"We had a run last year and hopefully if we can get a good result this weekend we'll see even more confidence coming back in the team and maybe we can get the same kind of run and can do the same this year.

"The semi-final win over Liverpool gave us a little spark and we showed we can beat any team on our day.

"It gave us a spark and we went and won the game - it helped us retain our Premier League status - hopefully that can happen again this time round."

The second-leg victory over Everton on Wednesday came at a cost, as goalscorer Kevin De Bruyne appeared to suffer damage to ligaments in his knee and ankle that looks set to rule him out for up to six weeks.

"David Silva is by far the toughest opponent I've faced," Westwood said. "Ever since I've played in the Premier League I've thought the same.