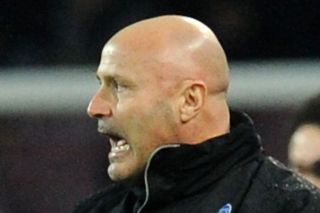 When Del Grosso turned to signal to the linesman, the ball struck the defender's back and bounced into the path of Lorenzo Insigne, who gleefully smashed his shot past Atalanta goalkeeper Ciro Polito to give Napoli a crucial lead.

Colantuono was adamant the right decision was made by the officials and chose to instead praise his players for taking it up to one of Serie A's best teams.

"There's no discussion - it's a good goal - from the field the linesman sort of half-lifted the flag, so we were a bit confused but looking back he was right," Colantuono said.

"Obviously the players on the pitch at that stage are going to be fired up and can say a few too many words.

"I think any team after an incident like that would've complained.

"Up until that point it was a really good game and I have to compliment my players, as so many of them were young and lacking experience but caused Napoli huge problems."

Napoli head coach Rafa Benitez explained why the teams he have managed seem to do better in cup competitions.

"My teams tended to win cup competitions rather than the league because of the squad and the strength in depth," Benitez said.

"You cannot think to win a league title without a very strong squad, which means having bigger revenue than the other clubs.

"This is why I say cup competitions are based more on tactics, approach and mentality, whereas the league is more about the squad."