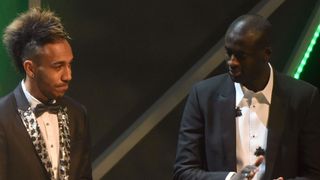 Borussia Dortmund forward Pierre-Emerick Aubameyang is confused over Yaya Toure's reaction to being succeeded by him as CAF Player of the Year.

Aubameyang prevented Toure from being named as Africa's leading player for a fifth consecutive year when he pipped the Manchester City midfielder to the top prize last Thursday.

Toure congratulated the 26-year-old, who has scored 27 times in as many appearances for Dortmund this season, but proceeded to launch a tirade against the vote – labelling it as "indecent", "pathetic", and having brought "shame to Africa".

The former Barcelona man, whose achievements with City have laid the foundation for his dominance of the award over recent years, appeared to take particular objection to Aubameyang's club exploits overriding those of Toure captaining Ivory Coast to 2015 Africa Cup of Nations glory in the final verdict.

Speaking to Sport Bild, Aubameyang said: "I really don't know why he said that at all.

"I am not going to get angry about it and for me it is already an old story, gone. It simply does not interest me."

Of more immediate concern to Aubameyang is Dortmund's task of hauling in the eight-point gap to champions Bayern Munich when the Bundesliga resumes later this month.

"We will certainly not give up without a fight and all is not lost yet," he added.

"We know that it will be very, very difficult to stop Bayern winning the league but nothing is impossible."