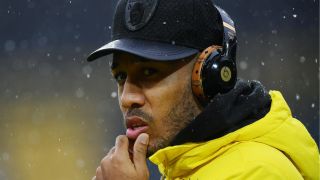 Borussia Dortmund legend Lars Ricken lamented Pierre-Emerick Aubameyang's deteriorating relationship with the club as the striker continues to be linked with a January move to Arsenal.

Aubameyang has been Dortmund's talisman since arriving from Saint-Etienne in 2013, scoring 141 goals in all competitions for the club.

However, his off-field behaviour has earned a number of internal suspensions, the latest coming before Dortmund's 0-0 draw with Wolfsburg after he failed to attend a team meeting.

The Gabon international has since been heavily linked with a move to Arsenal, speculation that saw him omitted from the squad to face Hertha Berlin.

Last weekend Dortmund confirmed they had received a bid for the striker from the Gunners, intensifying the questions over his future.

Whether he leaves or not, Ricken – who scored Dortmund's third goal when they won the Champions League in 1997 – says it is sad to see the bond between the two parties so strained.

"I think it really is a shame," he said, as quoted by RevierSport. "I do not know if there has been a player at Borussia Dortmund in the past four years who has scored more goals and won games for Borussia.

Aubameyang could make his first competitive appearance of 2018 on Saturday when Dortmund host Freiburg after Peter Stoger confirmed the 28-year-old had impressed in training.