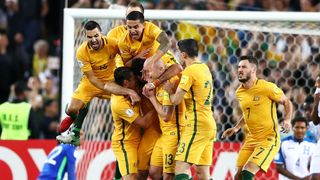 Captain Mile Jedinak fired Australia to the World Cup with a hat-trick in a 3-1 victory over Honduras in their inter-continental play-off on Wednesday.

The Socceroos had been held to a goalless draw in the first leg in San Pedro Sula last week but had a trio of second-half strikes from the skipper in Sydney to thank for securing their ticket to Russia.

Jedinak's first came courtesy of a deflected free-kick, before Tim Cahill went close to doubling the advantage with an excellent header that bounced off the top of the crossbar.

But Cahill's close call would not prove costly for Ange Postecoglou's men, who soon left Honduras needing two goals as Jedinak punished a Bryan Acosta handball by firing home from the penalty spot.

Honduras' desperate push for a response left them exposed at the back, and Jedinak was on hand to convert his second spot-kick of the night after Johnny Palacios brought down the advancing Robbie Kruse.

The result, which also saw Alberth Elis net for Honduras in second-half stoppage time, means Australia will compete at a fourth consecutive World Cup - a huge relief for Postecoglou after his side finished third to Japan and Saudi Arabia in the group stage.

Nevertheless, the coach's future remains uncertain after he was heavily linked with the exit regardless of the Socceroos' qualification fate.

Matthew Jurman was perhaps lucky to still be on the pitch after clumsily going in over the ball when making a challenge on Elis in the second minute, getting away with a yellow card to avoid the earliest of showers.

A tight - occasionally tetchy - encounter ensued, with Aaron Mooy's testing low free-kick from the left wing, which was pushed clear by goalkeeper Donis Escober, as close as either side came to breaking the deadlock in the opening half an hour.

Escober was on hand once more eight minutes from the interval to keep out a drilled Tom Rogic strike from an Aziz Behich cutback - the hosts dominating possession but creating few goalscoring opportunities.

Honduras lost Emilio Izaguirre to injury before the break and his replacement, Henry Figueroa, was involved in the Socceroos' opener.

A Jedinak free-kick eight minutes into the second half deflected off the defender and beyond Escober into the net.

Cahill - back in the starting XI after shaking off an ankle injury - then headed onto the top of the crossbar as Australia looked to put the match to bed.

Australia's place in the World Cup was all but certain when, after Acosta was deemed to have handled in the area, Jedinak placed a wonderful penalty low to Escober's right.

The visitors rallied but Kruse found a gap in their defensive line to race clear on goal, only to be hacked down by Palacios before he could pull the trigger.

Jedinak stepped up to convert the penalty and crown a memorable night for himself and Australia, although Elis did register a consolation goal as the celebrations got under way in the stands.