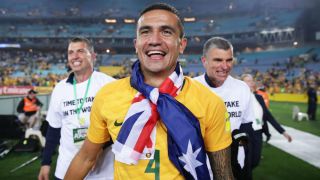 Cahill is Australia's top-scorer at World Cup finals, having netted five times, including crucial and spectacular strikes at each of the last three tournaments.

The veteran forward's place at Russia 2018 is up in the air, with Bert van Marwijk yet to name the final 23-man group for the competition and Cahill left on the bench for Friday's clash with the Czech Republic.

But Australian former Liverpool midfielder Johnston believes Cahill's character and ability to produce something from nothing makes him a handy option.

"I personally think he should be there," Johnston told Omnisport.

"I know people who have worked with him and he's been the saviour for three World Cups. He's a particular type of character that gets things out of his team-mates.

"Van Marwijk knows what he's doing. Bring him on for an overhead scissor in the last minute. There's no better player than Tim Cahill."

Cahill, 38, scored 11 goals in his most prolific qualification campaign to date.