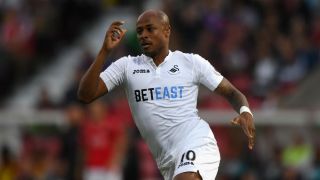 Swansea City have broken their transfer record to bring Andre Ayew back to the club from West Ham.

Ayew has signed a three-and-a-half-year deal after the Swans paid a reported £18million for his services.

The Hammers forked out £20.5m - then a club record - for the Ghana international 18 months ago, and the midfielder has only started 25 Premier League games since.

A hamstring injury suffered on his West Ham debut affected his momentum last term and Ayew has only started three league games since David Moyes took over at London Stadium.

Ayew scored 12 goals in 34 league games in his previous, solitary season at the Liberty Stadium after signing on a free from Marseille and joins a Swans side on the up after victories over Liverpool and Arsenal, which vaulted them out of the Premier League's relegation zone on Tuesday.