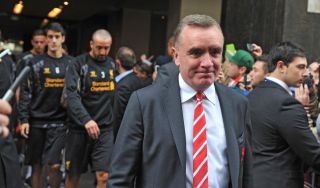 The Merseyside outfit are five points clear at the top of the Premier League with three games remaining and can take another giant stride towards a first league title for 24 years with a positive result against fellow title-contenders Chelsea at Anfield on Sunday.

Things were very different at the club four years ago, though, when they were in a perilous financial position under the much-maligned ownership of Tom Hicks and George Gillett.

With Fenway Sports Group now at the helm, the feel-good factor has returned at the club and Ayre has lifted the lid on just how precarious the situation was at Anfield before the John-Henry led American company came to the rescue.

He is reported as saying in the British media: "It is no secret. It's like that TV programme, Seconds from Disaster – we were sort of in that vein. It was horrific to see the football club in that state.

"I do not think there was a Liverpool fan in the city or anywhere who was not worried we would not get back to this position.

"We went from the court ruling to two years of scrapping via lawyers. Being told I was being sued for a billion pounds was a particularly low point.

"The Royal Bank of Scotland (who were owed money by the club) took a lot of stick from Liverpool fans at the time but deserved credit for how they stepped up, as did the club directors. It was an awful situation to be in, just as a fan. The hardest thing after the event was the previous owners never felt the right thing had been done but it was the right thing.

"One of the biggest parts of the court case was they said we could not legally make the transaction. John W Henry was waiting for the ruling to do the deal."

Ayre has no doubt Liverpool are in a strong position to kick on under the current ownership group.

"As one of the few people who was here with the last ownership and through this one, I can say the club is in a fantastically sustainable position now and that’s down to the people running it in the best interests of the club, not the best interest of the owners.

"It's easy to say we were 10 years into a stadium move and it's about time we are back in the Champions League, but if you think about where we were financially, just because you’re Liverpool it does not mean you have a right to get back up there.

"There are plenty of teams who could have slipped and slipped, despite new owners, so it’s an unbelievable achievement to get back where we are today. That is testament to the people who invested in it and worked on getting us back there."