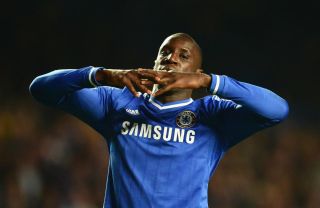 The Senegal international scored eight goals in all competitions last season, including crucial strikes against Liverpool in the Premier League and Paris Saint-Germain in the UEFA Champions League quarter-final.

However, his form in front of goal did not convince Mourinho to hand him regular starts and after just six in 29 appearances, he left the club to join Besiktas.

Much to Ba's frustration, Fernando Torres and Samuel Eto'o were preferred by the Portuguese head coach, something the striker believes was because they have bigger reputations in the world game.

"Sometimes when you are at a club with a lot of big stars, the name counts for more than the statistics," Ba is quoted as saying in the Daily Mail.

"Unfortunately, it was like that in my case. But I am happy I moved from Newcastle to Chelsea and achieved what I did."

Before agreeing his four-year deal in Turkey, the 29-year-old had appeared close to a move to Chelsea's Premier League rivals Arsenal, only for Mourinho to pull the plug.

He made an immediate impact for Besiktas with a hat-trick on his debut in their UEFA Champions League win over Feyenoord and is looking forward to facing the club he nearly joined in the play-off round.

"I always said the move to Arsenal was close," he added. "I thought the deal was done and I would just go and do the medical, but it went another way.

"Jose has said why it didn't happen. He was honest, he just didn't want to give them a striker who could score goals, especially with the arrival of [Mesut] Ozil.

"Now I am playing Arsenal in such a big match. It's crazy, but I've no regret on everything that happened."