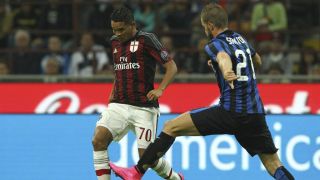 Carlos Bacca is eyeing a repeat of his rabona goal against Carpi in AC Milan's derby showdown with Inter on Sunday.

The 29-year-old scored with the trick shot in the 2-1 Coppa Italia victory on January 13, despite having been reprimanded by head coach Sinisa Mihajlovic for attempting a similar effort against Palermo.

Bacca would be happy to score in any fashion in order to help Milan to three vital points against their city rivals, but has confessed he could be tempted to try his Carpi tricks again.

"Every youngster imagines the kind of goal they want to score. Some dream of doing it from the middle of the pitch, some with an overhead kick," he told La Gazzetta dello Sport.

"I'd always wanted to score with a rabona. I tried with all the teams I've played for, but until a few days ago I hadn't succeeded, until Milan-Carpi.

"I know Mihajlovic told me off for the rabona against Palermo, but I was sure I would score and it was the quickest way to strike the ball and anticipate the defenders.

"It would be great if it happens [against Inter] and I'll try if I get the chance. But all that counts is scoring, is doesn't matter how. And that you win, of course."

Milan are unbeaten in their last five games in all competitions, while Inter have dropped off the pace at the top of Serie A with just one victory in 2016, but Bacca says form counts for little in a derby.

"Derbies are like finals - you just need to win," he said. "I hear that Inter aren't in a good condition at the moment, but these are games which do not follow the usual logic of the league.

"We need a winning mentality to get the three points."

Bacca has scored three goals in his last three games for Milan, taking his tally for the season to 12, and the Colombia international feels he is improving with every match as he grows accustomed to life in Italy's top flight.

"I'm happy with my performance. Serie A is a very tactical and physical championship but I think I've adapted well. Every time I go on the pitch I feel my confidence growing," the former Sevilla striker added.

"I hope to score many more goals still, to lift Milan as high as possible. I want this team to have the best of me."