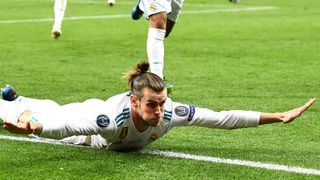 Gareth Bale made Champions League history as Real Madrid won the tournament for the third year in a row by beating Liverpool 3-1 in Kiev.

The Wales international was named on the bench, with Zinedine Zidane preferring Isco in the starting XI, but he came on a second-half substitute to devastating effect.

Bale had been on the pitch for two minutes and two seconds when he let fly with an unbelievable overhead kick from a left-wing Marcelo cross to put Madrid back in front after Sadio Mane had cancelled out Karim Benzema's opener.

And when Loris Karius spilled Bale's speculative long-range drive into his own goal, the Madrid man became the first player to score twice off the bench in a Champions League or European Cup final.

1 - Gareth Bale is the first substitute to score a brace in an European Cup/Champions League final. Amazing. May 26, 2018