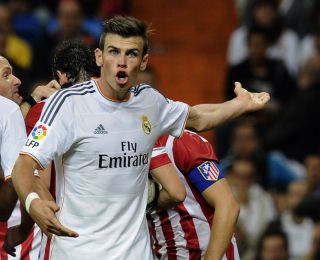 Bale joined Real from Premier League side Tottenham in September for what was reported to be a world-record fee, believed to be in the region of €100million (£85.3).

The Wales international has made just three appearances for the Spanish capital club due to a thigh injury, although he did find the net on his debut in a 2-2 draw at Villarreal.

The 24-year-old winger has drawn comparisons with Real's star attacker Cristiano Ronaldo after scoring a number of spectacular goals for Tottenham last season.

Bale found the net 26 times in all competitions for Spurs in 2012-13, but Salgado - who won four league titles and two UEFA Champions League crowns in a 10-year spell with Real between 1999-2009 - does not feel that the ex-Southampton man will be able to match Ronaldo on the goalscoring front.

"It is a complicated issue," Salgado said.

"Firstly supporters can't expect that because Real Madrid paid more money for him (Gareth Bale) than Cristiano Ronaldo, he will score more goals than Ronaldo. He will never do it."

Salgado faced Bale in his time with Blackburn Rovers and, although he is a big admirer of his talents, the 37-year-old knows that it will be difficult for the Welshman to adjust to life in Spain's top flight.

"I suffered against Gareth Bale as a player," he added.

"He is an awesome player with huge potential but he is used to the Premier League and he is still on his way to getting used to the Spanish league.

"It doesn't matter how much money you pay for a player because later on players need to adapt to the style of play, the country and the culture.

"Let's see how he deals with those things. Real Madrid has a lot of pressure and if you add into it that Bale is the most expensive player in Real Madrid's history it is going to be massive for him."