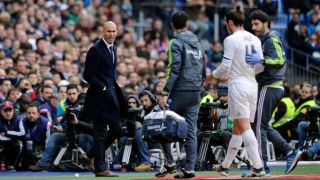 Zinedine Zidane says Real Madrid must wait for the results of a scan on Gareth Bale's calf injury, but is not concerned about Karim Benzema.

Bale was forced off at half-time of Madrid's 5-1 thrashing of Sporting Gijon on Sunday, while France international Benzema was taken off late on after taking an accidental kick from James Rodriguez.

"Karim's is a kick. Bale's is more complicated because it's his calf," Zidane said afterwards. "We'll see what the scan says. We hope it's something small."

Bale had opened the scoring for Madrid before Benzema and Cristiano Ronaldo scored twice each in the thumping victory and Zidane was delighted with his front three's efforts - especially without the ball.

"We played a very good first half. The start was fantastic because it's not easy to score five goals twice," he said, having watched his side beat Deportivo La Coruna 5-0 last week.

"The three are very good and that's no surprise. I'm very happy with their work and not only with the ball, they worked very well defensively. And that's important.

"I know what we can do and what we'll do in future. I'm just at the beginning, because what I want is to keep going for a title at the end of the season. We must continue like that.

"We want to win games because that decides everything in the end."