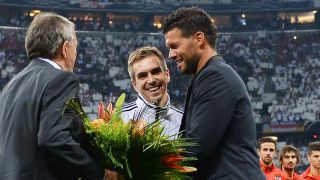 Former Bayern Munich and Germany star Michael Ballack has slammed Philipp Lahm for his part in a dispute over the national team captaincy.

Lahm, along with Xabi Alonso and Tom Starke, played his final game before retirement in Saturday's 4-1 Bundesliga win over Freiburg as fans and former players paid tribute at the Allianz Arena.

Praise of the 33-year-old's glittering career and professional attitude has continued over social media and Bayern have already confirmed that he will be inducted into the club's Hall of Fame.

Ballack, however, says he got to know "Lahm's other face" after the younger man assumed captaincy of Germany in 2010.

Lahm was given the armband after Ballack was forced to miss the World Cup due to injury and the defender stated while in South Africa that he wanted to stay in the role.

His comments prompted division among fans and players but the full-back ultimately remained the skipper until he retired following Germany's win at the 2014 finals. Ballack, however, did not appear for his country again.

"I got to know Lahm's other face," he told Sport 1 Doppelpass.

"I didn't know that a player who takes on the role of captain doesn't have to give it back afterwards. That was a frontal attack.

"I never made the step back to the national team after that incident. I had no chance to do anything against it. The way it took place was absolutely not okay."