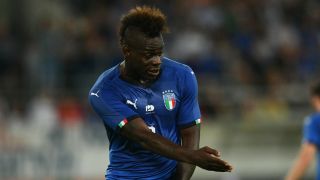 Mario Balotelli must improve to be sure of his place in Italy's starting XI, according to new Azzurri coach Roberto Mancini.

Former Inter and Manchester City boss Mancini got his Italy tenure off to a winning start on Monday, as goals from Balotelli and substitute Andrea Belotti secured a 2-1 friendly win over Saudi Arabia.

With no World Cup campaign to prepare for, Mancini has named a relatively inexperienced squad for his first batch of fixtures at the helm, with Balotelli returning from the international wilderness to make his first appearance since 2014.

But despite Balotelli's scoring return, Mancini insists the 27-year-old can offer more to his side.

"Balotelli can do better, much better, but I thought he did pretty well in the first half," Mancini said.

"He scored a goal, which is important for a striker, but of course he can do more.

"We all know what a player he is, he has made a great goal. Mario is an extraordinary player who can give us a great hand."

Balotelli's superb strike put Italy ahead and, after Domenico Criscito had hit the woodwork, Torino striker Belotti added in the second half.

Saudi Arabia pulled one back through Yahya Al Shehri though, with a fine save from Gianluigi Donnarumma late on ensuring the victory, and Mancini emphasised there were improvements to be made all over the pitch, with friendlies against France and the Netherlands next up.

"The first half went well, as we had 16 shots on goal and 11 corners, but then as fatigue emerged later on, we lost intensity," he added.

"It's always good to win, especially after such a long time. When you play against a stronger side, the performance will probably be higher, but our problem against France will be maintaining intensity over 90 minutes.

"We'll use other players against France, probably younger ones, and I think it'll be a very important learning experience for them.

"It was my first game, so important to win. Saudi Arabia are a long way behind us in the ranking, but they are preparing for the World Cup right now and that's not to be taken for granted.

"A victory keeps confidence high, we now prepare for France. It's the end of the season, our players are all tired."

2 - Only two of the last eight Italy's managers have won on their debuts in charge of the Azzurri: Antonio Conte and Roberto Mancini. Premiere.May 28, 2018