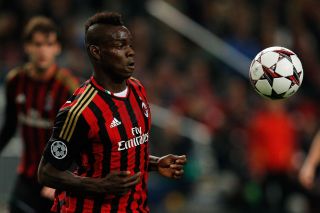 The Italy international was unavailable for Saturday's 1-0 victory over Udinese due to a thigh injury.

But Allegri did not rule out the possibility that the former Manchester City striker could feature against the Spanish champions, and the 23-year-old is set to be evaluated after the club's training session on Monday.

"Balotelli is doing better," he said. "We'll check on his condition in training today and we'll see if he can be called up.

"The physical condition of the side is improving. We all have to work in the same direction."

Ahead of the match with Gerardo Martino's charges at San Siro, Allegri was in confident mood of repeating their 2-0 home victory over the Catalan giants in last season's round of 16 first leg.

But Barcelona romped the return fixture 4-0 to progress to the final four, and the 46-year-old warned his squad they can ill afford any slip ups.

He added: "It will be a fascinating game for everybody.

"We need to play with courage and sacrifice against the best team in the world to get three points and increase our chances of qualifying.

"I believe that tomorrow Milan will perform well, we must try to make as few mistakes as possible. Barcelona will control the ball more than us, so we have to play a game similar to last years."

Milan sit second in Group H with four points from two matches, having defeated Celtic in their opening fixture before salvaging a 1-1 draw with Ajax thanks to Balotelli's penalty deep into injury time.