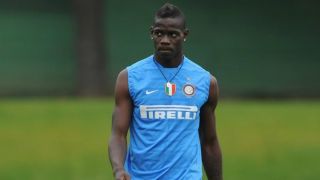 Former Inter midfielder Kerlon has opened up on some of Mario Balotelli's antics in the dressing room at the Serie A giants.

Kerlon signed for Inter in 2008 as a highly-rated prospect out of Cruzeiro - famed for his 'seal dribble', running past opponents balancing the ball on his head - but failed to make a single league appearance for the club, instead being loaned to Chievo, Ajax, Parana and Nacional-NS during his time in Milan.

But that does not mean Kerlon did not return to Brazil, where he now plays for Villa Nova, without some stories to tell of maligned Italy international Balotelli, who now plies his trade for AC Milan on loan from Liverpool.

"Balotelli is a very nice guy ad an extraordinary person, but he did some unbelievable things off the pitch," Kerlon told ESPN Brazil.

"He had a habit of arriving at training before anyone else and peeing on all the players' boots … it was very funny.

"I've never seen a kid of 18 years do it, and no feel sorry for any of it, even to Julio Cesar and Maicon."

Kerlon reflected on his time at Inter and said he never tried his 'seal dribble' in training because of the height and power of the team's defenders such as Marco Materazzi, Lucio and Walter Samuel.

"I did a pre-season with Jose Mourinho at Inter, but I never tried the dribble," Kerlon said.

"The guys were very tall and strong, it's complicated.

"If Materazzi hit me, I would fly away."