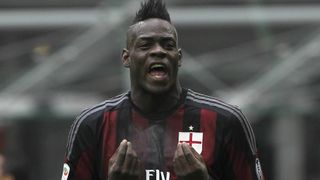 Liverpool striker Mario Balotelli rates his form in recent seasons as no more than "five out of 10" but the enigmatic star still harbours ambitions to win the prestigious Ballon d'Or award.

Balotelli was tipped for stardom after impressing as a youngster at Inter, but the Italy international has seen his progress stagnate.

He scored just one Premier League goal after moving to Anfield ahead of the 2014-15 campaign and only found the back of the net once in Serie A after rejoining AC Milan on a season-long loan last term.

Now 25, Balotelli recognises that he must start living up to his potential but the former Manchester City star is confident of doing so.

"I have not done enough in recent years. I can do much better. But it takes time. On a scale of one to 10, I have only reached five. But I will get to 10 eventually, because that is my goal," Balotelli told Corriere della Sera.

"I want to win the Ballon d'Or. Although I realise I got stuck at five out of 10 in the last two years when my goal was to get closer to 10. I know people will laugh when I say I want the Ballon d'Or. I have not done everything needed to become the best.

"But the most important thing is that I have realised my mistakes and it is not too late yet. I don't want to reach the end of my career thinking that I have not done everything to become the best.

"I started working harder two years ago, even if the results are not there yet. Maybe I am paying for the previous 23 years. But I am calm. I know that things have changed for me over the past two years."

Balotelli missed out on a place in Italy's squad for Euro 2016 following his underwhelming performances in 2015-16, but he does not blame Antonio Conte for his decision.

"Conte was right to pick other players. I would have done the same thing had I been him."