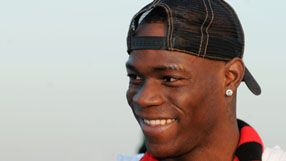 After a miserable start to the season, Milan, who host Udinese on Sunday, have bounced back to win seven of their last nine league games and climb to fifth in Serie A, giving them hope of challenging for a Champions League place.

Milan supporters gave Balotelli a rapturous reception when he arrived in the city on Wednesday and one policeman was reported injured as more than 1,000 fans mobbed the striker outside the restaurant where he had dinner with club directors.

But amid the euphoria and chaos, there is a risk that the wildly unpredictable striker could disrupt, rather than improve, a team who has started to gel.

His signing also represents a dramatic U-turn by club president Silvio Berlusconi, who earlier this month likened Balotelli to a 'rotten apple' and said the club would not sign him.

"I have formed my opinion of Mario Balotelli as a man and I would never accept him in the changing room," said the former Italian Prime Minister.

"At all clubs and especially here at Milan, the personality of a player is very player and if there is a rotten apple in the changing room, it will affect the others."

Yet on Wednesday, Berlusconi's chief executive Adriano Galliani was singing a different tune.

"I have always dreamed about presenting Mario Balotelli," said Galliani after Balotelli arrived at Milan in a private jet on Wednesday.

"Mario's arrival has greatly strengthened our team and we are very happy. We have worked really hard for this."

Balotelli, who played at neighbours Inter before moving to Manchester City, said it had also been a lifelong dream.

"I've been wanting to play for Milan for a long time but hadn't been able to until now," he said.

Balotelli's arrival presents the biggest challenge so far for the unflappable Allegri, who has so far proved highly adept in dealing with players regarded as troublesome, such as Zlatan Ibrahimovic and Robinho.

At the end of last season, Ibrahimovic and defender Thiago Silva led a queue of players through the exit door as Milan decided that the priority would be to put the club on a firmer financial footing.

With the team under less pressure to deliver titles, Allegri seemed to be enjoying the challenge of rebuilding the side with players such as teenager M'Baye Niang and 20-year-old Stephan El Shaaraway, who had exceeded expectations and is Serie A's second leading scorer with 15 goals.

Although Balotelli himself is only 22 and fits into the youth-orientated policy, his arrival will inevitably raise expectations and put the pressure firmly back on Allegri.

Allegri has not yet commented on whether Balotelli will face Udinese in Sunday's evening game on a weekend which gives Napoli the chance to pull level with leaders Juventus.

Juventus, who will have coach Antonio Conte serving the first of a two-match touchline ban, are away to mid-table Chievo in the Sunday mid-day match while Napoli host Catania on Satur