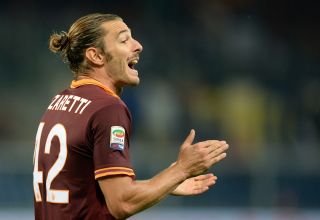 The capital club have won every single game so far this campaign - putting city rivals Lazio and Walter Mazzarri's Inter to the sword - and sit top of Serie A as a result.

Roma missed out on a place in the UEFA Europa League last season as they finished sixth, but new manager Rudi Garcia appears to have had an inspirational effect since taking over in June.

Still, despite their superb form, Balzaretti - a scorer in the derby win over Lazio - was quick to play down their title chances.

"For me it is still very early, these seven games have been important for the signal that we have given to the league," he told Corriere dello Sport.

"But objectively, Napoli and Juventus are more likely than us to push for the title."

Balzaretti admitted that the mentality in the dressing room has improved since last season and credited Garcia for helping bring the team together.

"The transformation is the merit of everyone, we have been able to regroup the dressing room," he added.

"There was a bad climate, a great tension, players with little conviction because the previous year was very tough. Now it is quite the contrary, there is great enthusiasm, great confidence.

"The greatest work he (Garcia) has done is on a psychological level, he has brought together the club and has given confidence and joy to the players who had experienced a terrible season."