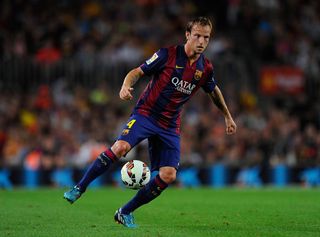 Rakitic is one of seven new signings to have joined Barca during the transfer window and made a winning start to his career at Camp Nou as they cruised to a 3-0 La Liga win over Elche in Luis Enrique's first competitive game in charge.

The likes of Alexis Sanchez, Cesc Fabregas and Carles Puyol all left in the close-season in an overhaul that was sparked by a 2013-14 season that saw the Catalan club go without winning a major trophy.

And Rakitic feels the changes Barca have made are already having a considerable impact.

"It is very important for people to realise that we're making progress," Rakitic said.

"There have been a lot of changes to the team in every area, but you can tell that we're constantly improving."

Rakitic will hope to help guide Barca to a second straight victory when they travel to Villarreal on Sunday, but is anticipating a strong challenge from Marcelino's men.

"It'll be difficult because Marcelino makes his teams work very hard," he added.

"But we just have to focus on ourselves. We're very positive about the trip."