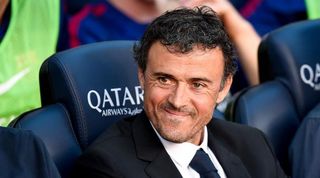 The Liga table toppers ultimately ran out comfortable winners thanks to goals from Xavi, Neymar and Lionel Messi, with the latter now one behind Telmo Zarra's La Liga record of 251 goals.

Despite the one-sided scoreline, Barca endured great difficulty breaking their opponents down for long periods of the match, with Gaizka Garitano's going into half-time level.

In fact, the visitors could have gone into the break ahead after Ander Capa and Saul Berjon both missed glorious chances.

Nevertheless, Barcelona made them pay for their inability to take those chances, but Luis Enrique was no less generous in his praise for the club who were promoted from the Segunda Division last season.

"I think Eibar are wonderful," he told reporters. "The club is a reflection of the coach and the players.

"They are brave, bold, and hard workers. I talked about that before the game. Eibar aren’t here by chance.

"They're in the best time in their history and I think they have the potential for a great season."

Xavi, who captained the side on Saturday, concurred with his coach and acknowledged that Barcelona did struggled at times.

However, he was left generally content, not only with his goal, but with the team's performance against stubborn opposition.

"We struggled to open them up but after the first half it was easier," he added. "I think they got more tired.

"I'm obviously happy with the goal. Sometimes two minutes can change everything but I think we played a good game.

"It's no coincidence that we haven't conceded. We all work. The coach has specific ideas and we all work to them."