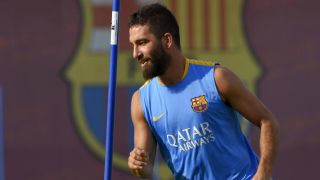 Barcelona defender Dani Alves is relishing the opportunity to play alongside Arda Turan in 2015-16.

Turan is ineligible to play until January, due to Barca's transfer ban, and Dani Alves said the 28-year-old's debut cannot come soon enough.

"It's an honour to have Turan with us," the Brazil international said as Barca prepare for Tuesday's UEFA Super Cup against Sevilla.

"It's a pity he can't help us now, we are eager for him to play, for his quality, intelligence and personality.

"He's a phenomenon. And more, he's been very funny in the camp. Our team needs crazies like him."