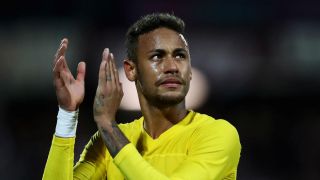 Marco Verratti does not believe Neymar's absence was the reason Paris Saint-Germain failed to beat Montpellier on Saturday.

PSG were without world-record signing Neymar due to a reported foot injury as their 100 per cent start to the Ligue 1 season ended with a 0-0 draw at Stade de la Mosson.

Unai Emery's side dominated possession, but managed just one shot on target and Verratti – restored to the starting line-up after serving a three-match ban – insisted the loss of the Brazilian was not behind their failure to triumph.

"Everyone thinks like that. It's like Barcelona without [Lionel] Messi or Real Madrid without Cristiano Ronaldo – it is not because Neymar was not there that PSG hasn't won," Verratti told Canal +.

"We are a great team, even without him. It will just be a matter of turning words into action the next time the situation arises."

The Italy midfielder was adamant PSG played to the best of their abilities, but was keen to turn his focus to Wednesday's Champions League clash with Bayern Munich in Paris.

Marco Verratti : "We will try to do better Bayern. Winning every match isn't easy." September 23, 2017

"It was a tough game, there was not a lot of space," said Verratti.

"We played at 100 per cent. The concentration is there. We did not let Montpellier have a single shot.

"It got harder to score the longer the time went on. We did have opportunities.

"After six matchdays, it can happen that there is a difficult one. Now we have to think about the Champions League."