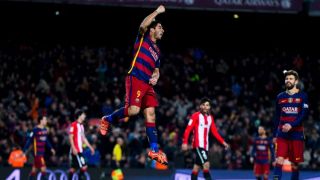 Barcelona came from behind to cruise into the Copa del Rey semi-finals courtesy of a 3-1 second-leg win over Athletic Bilbao at Camp Nou on Wednesday.

Boasting a 2-1 lead from the first leg, Barca fell behind at the Camp Nou to Inaki Williams' opener but Luis Suarez, Gerard Pique and Neymar were all on target in the second half as the holders ended Athletic's campaign for the second season in succession, winning 5-2 on aggregate.

Last year's finalists dominated long spells of the first half and, after Thomas Vermaelen saw a header ruled out for offside, Athletic deservedly led through Williams 12 minutes in.

Ernesto Valverde's side delivered a typically robust display to initially limit Barca's attacking threat as Suarez, Neymar and Lionel Messi were kept relatively quiet on their first outing as a trio in three matches due to suspension and injuries.

Suarez was banned for the opening clash at San Mames due to his role in a fracas against Espanyol in the round of 16 but the Uruguayan was back for this match and took his tally for the season to 30 goals in all competitions early in the second half.

Pique headed in a second nine minutes from time as Barca's quality began to show before Neymar shook off a poor challenge from Mikel San Jose to jink between a clutch of Athletic defenders and fire past Iago Herrerin a minute into stoppage time.

Aritz Aduriz's goal late in the first leg gave Athletic hope in the tie and he almost drew the visitors level on aggregate three minutes into the return fixture when his close-range effort was blocked by Ivan Rakitic.

Barca thought they had taken the lead against the run of play - Vermaelen penalised for fouling Mikel Rico in the build-up to his header - but Athletic opened the scoring with a fine goal finished off by Williams.

Having agreed a new contract with the club last week, the highly rated young striker latched onto Aduriz's pinpoint throughball before rounding Marc-Andre ter Stegen and cleverly rolling the ball across the line.

Neymar remained Barca's main threat despite being subject to some physical treatment from Athletic, although he saw penalty shouts waved away when he went down softly under a challenge from Aymeric Laporte.

Laporte got away with what appeared to be genuine a foul on the Brazilian in the box soon after, while Mikel Balenziaga was only shown a yellow card when he shoved Neymar off the ball just outside the penalty area before half-time despite being the last man.

As Barca applied further pressure leading up to the break, Iago Herrerin thwarted Neymar one-on-one with his feet before Messi sent a shot wide after a jinking run into the box.

The hosts continued on the front foot after the break, Messi's cross almost finding Neymar inside the area and Rakitic angling an effort over the crossbar before Suarez restored parity seven minutes after the restart.

Sergi Roberto set Messi free down the left and when both Rakitic and Laporte failed to make contact with the cross, Suarez stole in to finish with his first touch at the far post.

Neymar completed the scoring in stunning fashion inside stoppage time when he turned away from San Jose - receiving another kick for his troubles - and planted an unstoppable effort into the top corner as Barca eventually put Athletic to bed.