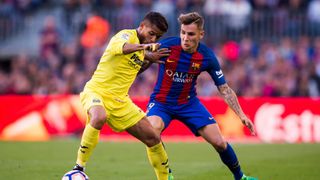 The 23-year-old France international was substituted after 75 minutes at Camp Nou, with Jordi Alba coming on in his place.

A club statement released by Barcelona on Sunday stated Digne had suffered "an overload in the femoral biceps of his right leg".

Barca did not put a timeframe on Digne's recovery period as they enter the final two matches of the LaLiga campaign level on points at the summit with Real Madrid.

[MEDICAL ANNOUNCEMENT] Lucas Digne has an overloaded femoral bicep in his right leg May 7, 2017

Luis Enrique's men are above their rivals by virtue of a superior head-to-head record but Madrid still have a game in hand.

Digne has made 25 appearances across all competitions in his debut season for Barcelona after joining from Paris Saint-Germain last July, on the back of an impressive year on loan at Roma.