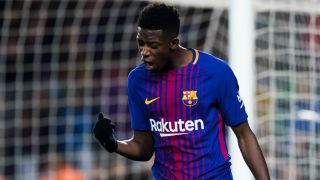 Barcelona head coach Ernesto Valverde denied he has any concerns regarding Ousmane Dembele's habits off the field, insisting the club are happy with the Frenchman.

France international Dembele has been plagued by injuries since arriving from Borussia Dortmund for €105million last August, limited to just four competitive starts for the LaLiga leaders.

Speculation has also claimed Barca are worried about the 20-year-old's behaviour away from the pitch but Valverde dismissed those reports following Wednesday's penalty shoot-out win over rivals Espanyol in the Supercopa de Catalunya.

"This question surprises me a bit. All of the players off the field are the most professional in the world to perform on Sunday and in the case of Dembele, they use trusted people, nutritionists," Valverde told reporters.

"We are happy with him and he is going to help us a lot."

Dembele was included in the second-string squad for the midweek fixture at Camp d'Esports in Lleida, where Barca triumphed 5-4 in a shoot-out after the contest ended 0-0.

On Dembele's performance against Espanyol, Valverde said: "Good. He tried to get involved in play and has worked on individuals moves and it is useful for use. Little by little.

"We hope that he translates that into Liga games."