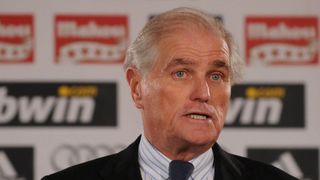 Barcelona have a stronger football philosophy than Real Madrid, according to Ramon Calderon.

The former president at the Santiago Bernabeu believes Barca have stuck with a common playing identity since Johan Cruyff's tenure as coach between 1988 and 1996, while Madrid have suffered from making too many coaching changes.

Calderon suggested that if a change in approach is not implemented in the near future they risk being blown away by the Catalan side, who claimed a domestic and European treble last season and handed Madrid a 4-0 thumping in the capital in November.

"We [in Madrid] go from one coach to another without any criteria, without planning anything. We have to recognise Barcelona have done better than us all those years," he told Omnisport.

"Barcelona, since Cruyff's era in the [19]80s, stabilised a style and way of playing and everybody understood that.  All of them have respected it with both good and bad years but at the end they have had a plan and idea.

"Here, at Real Madrid, that doesn't happen because the president [Florentino Perez] is an engineer and if we don't change that we will see more 4-0 defeats against Barcelona.

"Ten coaches have been at Real Madrid in the last 10 years with this president. It’s something impossible to find in any other big club."

Real Madrid are set to appeal a two-window ban on registering new players which they received from FIFA for breaching rules relating to the transferring of players under the age of 18.

Barca received the same punishment in 2014 and Calderon believes the rules should be relaxed.

"I think FIFA should be more flexible interpreting that law," he added. "Most of the young players and their families come to Madrid in order to fill a will because some of them were poor and that allowed those families to have a dream."