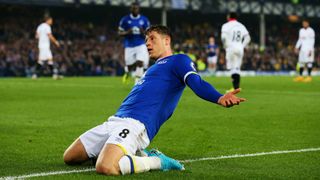 Antonio Conte has described Ross Barkley as a "good prospect for Chelsea" as the Premier League champions close in on a move for the Everton midfielder.

Reports suggest Barkley, whose contract at Goodison Park expires at the end of the season, is undergoing a medical on Friday ahead of a £15million deal with Chelsea seemingly getting their man after being frustrated in their attempts to take him south during the summer transfer window.

Despite Conte insisting the club would announce when the move was completed, his willingness to openly discuss the 24-year-old suggested it was merely a matter of time.

The Italian, speaking ahead of Saturday's FA Cup clash with Norwich City, said: "For sure we're talking about an English player, a young player, a good prospect for Chelsea.

"This is a good opportunity for the club to buy this player. But I repeat, for news the club will inform.

"He's very young, he has a lot of space for improvement. He's very strong physically and has good technique.

"I repeat, he's a good prospect, but at the same time it will be very important [that] he recovers from injury.

"The player has not played for seven months. In case this player signs for the club, we will inform you if there's some news."

Conte declines to comment further on transfer targets. He has given his opinion to the club.January 5, 2018

Chelsea have also been linked with a move for West Ham's Andy Carroll, but Conte indicated a decision on the striker was not his to make.

"About the transfer market, like I said in the last press conference, I don't know and I give my opinion to the club and then the club decide," Conte added.

"I repeat. It's the club that hires, not me. It's not my job. I am a coach and I give my opinion if the club ask me, but then it’s the club who decides on the players to sign, sell."