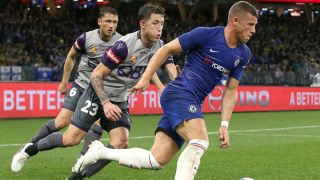 Ross Barkley feels ready to impress under Maurizio Sarri at Chelsea after a nightmare first few months at Stamford Bridge.

The midfielder joined from Everton in January for a reported fee of £15million but made only two Premier League appearances under Antonio Conte.

Injuries curtailed the 24-year-old's integration into the Chelsea set-up, with Barkley having had surgery on a torn hamstring last year that led to a succession of further problems.

However, the England international is determined to kick-start his career with the London club under a boss he feels favours a style of play to which he is suited.

"I arrived here with a long-term injury," he said ahead of Wednesday's International Champions Cup clash with Arsenal.

"I didn't play many games because of that and a few niggles, little grade ones [muscle tears] from recovering and getting used to working hard. But I didn't see it as a waste of time because, from the time that I joined in January, I have got my body feeling better than ever before.

"I have done everything I could perfectly. I felt strong towards the end of the season and then, in the off-season, worked hard with the strength and conditioning coach. I got myself really fit just to give myself a head start. I am really prepared and I feel at home with the team now.

"The new manager obviously has a different style to our previous manager. There will be freedom because you have three men in the midfield. You can go forward, get close to the box, have shots, try to create but obviously we have to be disciplined and organised without the ball.

"I want to be scoring goals, creating goals and, towards the end of the season, there will hopefully be a prize, with a trophy or a couple of trophies. One step at a time, but I'm hoping to start the season really strong."

Barkley's nightmare 2017-18 season meant he missed out on the World Cup, where England sprung a surprise by reaching the semi-final stage for the first time since 1990.

He hopes to force his way back into Gareth Southgate's plans after being impressed by what he saw from his compatriots in Russia.

"It is very exciting and you see that with the younger age groups," said Barkley. "They are winning World Cups and doing very well with developing players differently. You see the quality and confidence that they have got to give in the future. In the next World Cup or next Euros, there may be even more talent mixed in with experience.

"To earn a regular spot at Chelsea is my main focus. If I do well at Chelsea, then the national team will take care of itself but one of my goals is to get back in the England set-up. I am ready to kick on this season."