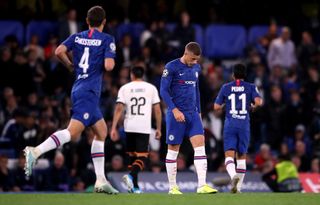 Frank Lampard confirmed Ross Barkley was Chelsea’s designated penalty-taker despite the on-field argument that preceded his crucial miss against Valencia.

The Blues, trailing 1-0 to a goal from Valencia winger Rodrigo, were given a lifeline in the closing stages when VAR flagged up a handball in the area.

Barkley, on as a substitute seven minutes earlier, assumed responsibility for the penalty but only after some heated debate with team-mates Jorginho and Willian.

The latter looked extremely unhappy to lose the argument, and even more so when Barkley’s effort clipped the crossbar.

The miss condemned Lampard to defeat on his Champions League debut as Chelsea boss.

Afterwards Lampard said: “Ross is the penalty taker. He took some in pre-season and he has been when he has started, and he was today when he came on.

“I don’t know what conversation was, but Jorginho and Willian were penalty-takers until Ross came on the pitch.”

Lampard confirms that Ross Barkley is the penalty taker when he is on the pitch having taken some in pre-season. He adds that Mason Mount has an ankle injury but it is too early to say how serious that is.#CHEVCF— Chelsea FC (@ChelseaFC) September 17, 2019

Lampard, who played 102 Champions League matches for Chelsea and captained them to their 2012 triumph, admitted his young team were given a harsh lesson on life among Europe’s elite.

He fielded four Champions League debutants, and Willian and Tammy Abraham went close to breaking the deadlock numerous times before Rodrigo pounced from a set-piece with 16 minutes to go.

“We probably should have won, or at least got a draw,” added Lampard. “We created enough chances, we had the penalty, and we conceded with their one shot on goal.

“It’s a harsh lesson but that’s Champions League football. We should have got more tonight.”

To rub salt in the wounds Mason Mount had to go off in the opening 15 minutes after former Arsenal midfielder Frances Coquelin left his studs on the inside of the youngster’s shin.

Lampard does not yet know the extent of the injury but said: “It was a shame, he’s been playing well and he started this game well.”

The Spaniards were supposed to be there for the taking for Chelsea, having arrived in west London in turmoil following the sacking of popular manager Marcelino last week, a move which has angered the players as well as the fans.

But new boss Albert Celades had predicted they would not play like a team on the verge of mutiny, and he was proved right.

Celades said: “Obviously we are delighted. It’s very difficult to come here and get a win against a good side with great players.

“We did a good job. The players are happy. Let’s hope we can just speak about football from here on in.”