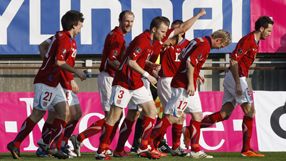 The Galatasaray striker took a Tomas Rosicky pass and fired home in the third minute for his first goal of the qualifying campaign.

The Czech team, narrowly beaten by world champions Spain in their last qualifier, kept control and hit the crossbar twice before a Michal Kadlec header in the 70th minute sealed the win.

Czech Republic have nine points from five games and are second in Group I behind Spain, who play in Lithuania on Tuesday.

Liechtenstein have yet to win a point in four matches.