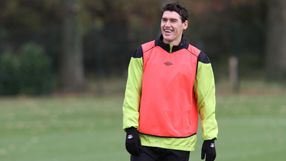 City's hopes looked forlorn when they lost to Arsenal earlier this month but they have rediscovered their best form just in time to capitalise on Manchester United's stumbles at Wigan Athletic and at home to Everton.

With both clubs having three games left to play, United have a three-point advantage but City can return to the top of the Premier League if they win Monday's derby which is being touted as a title decider.

"You've always got to hope," the England midfielder said in an interview on City's website.

"There's always a danger of losing concentration if it's not in your own hands, but now it is.

"To call it a second chance is probably right. It's all built up to a huge game on Monday and we're all really looking forward to it.

"There's probably been less pressure on us in the last few games but I don't think you can get away from the size of the game against United and the pressure on the team; it's probably going to be down to who handles that best."

Of the 161 previous Manchester derbies, 67 have been won by United compared to 44 for City.

Barry said City would still have plenty of work to do even if they did complete the double over United and move top.

"I think initially, because the derby is the next game, it is a must-win for us," he said.

"Then you have to look after the games still to come. If we get a positive result against United that certainly is not the end of it. Newcastle United and QPR have got so much to play for themselves.

"People are speaking of this as maybe being the biggest game in Premier League history and, on a personal level, it's a massive game for me to be playing in."