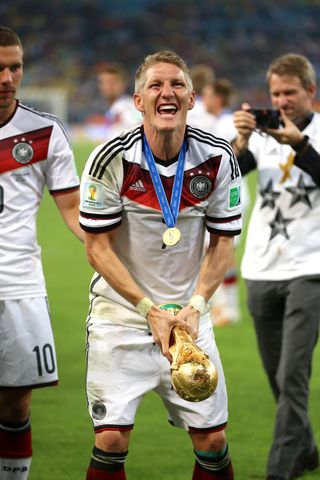 Schweinsteiger has called time on a glittering career which featured a World Cup triumph with Germany in 2014 and numerous trophies with Bayern Munich, including the 2013 Champions League.

After spending most of his career with Bayern, the 35-year-old had two seasons at Old Trafford before moving in 2017 to Chicago Fire, who failed to reach the MLS play-offs at the end of last month.

The Time has now come: I would like to thank both, you and my teams @FCBayern, @ManUtd, @ChicagoFire and @DFB_Team and of course @AnaIvanovic and my family for their support!— Basti Schweinsteiger (@BSchweinsteiger) October 8, 2019

Schweinsteiger wrote on social media: “Dear Fans, the time has now come and I will be finishing my active career at the end of this season.

“I would like to thank both you and my teams FC Bayern, Manchester United, Chicago Fire and the German national team. You made this unbelievable time possible for me!

“And of course I would like to thank my wife Ana Ivanovic and my family for their support. Saying goodbye as an active player makes me feel a little nostalgic, but I am also looking forward to the exciting challenges that await me soon. I will remain faithful to football.

“Many, many thanks for the time we spent together, I will always have a place for you in my heart.”

Schweinsteiger joined Bayern at the age of 14 and went on to make more than 500 appearances for the club as they dominated German football.

As well as winning eight Bundesliga titles, Schweinsteiger also won the DFB-Pokal Cup on seven occasions before joining Manchester United on a three-year contract in July 2015.

It proved to be an unsuccessful spell and Schweinsteiger was sidelined when Jose Mourinho replaced Louis Van Gaal in charge, with Mourinho reportedly unhappy that the World Cup winner often returned to Germany for treatment on injuries.

Congratulations to my good friend @BSchweinsteiger on an unbelievable career. It was a pleasure to get to play alongside you. Good luck in your retirement 👏👏👏 #legendpic.twitter.com/rHOCbOnWBH— Wayne Rooney (@WayneRooney) October 8, 2019

Although United won the FA Cup in 2016, Schweinsteiger made just four appearances for the club the following season before his move to Chicago.

Schweinsteiger retired from international football in August 2016 after making 121 appearances for the national side.