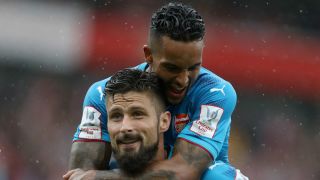 Arsenal made it two wins from two in the Europa League with a 4-2 victory away to BATE on Thursday.

The Gunners boss stuck to his promise to hand his squad players the chance to impress, with Jack Wilshere involved, Ainsley Maitland-Niles and Reiss Nelson starting at wing-back and midfielder Joe Willock given a place in the senior starting line-up for the first time.

Wilshere was especially effective early on and set up Walcott to prod in the opener before the forward capitalised on a goalkeeper howler to double the visitors' lead.

Holding converted from point-blank range before Mirko Ivanic got a goal back in a breathless first half hour.

Giroud's penalty restored Arsenal's three-goal advantage and they saw out an important win that keeps them top of Group H, despite Mikhail Gordeychuk setting up something of an anxious last 20 minutes.

Walcott hit the post following the first slick Arsenal move of the match, the England forward prodding the ball against the upright from close range after combining superbly with Wilshere, who made only his second start of the season.

A minute later, Walcott made no mistake. Wilshere and Giroud played a clever one-two, and although Walcott's header from Wilshere's cross was well saved by Denis Scherbitski, the rebound fell kindly for him to poke home.

The Gunners were in complete control, with Wilshere seeing a second goal disallowed for offside, although Ivancic had David Ospina worried with a half-volley that bounced just wide.

But just as BATE seemed to be threatening a comeback, they gifted Arsenal a second. Scherbitski passed the ball straight to Walcott, who steadied himself before drilling into the bottom-left corner.

Three minutes later and the Gunners had a third, with Holding diverting Per Mertesacker's header into the net from a corner, but the home side hit back almost immediately as Ivanic powered Aleksey Rios' cross beyond Ospina at the near post.

BATE finished the half strongly but any hope of a comeback was effectively ended just four minutes after the restart. Stanislav Dragun tugged back Shkodran Mustafi in the box and referee Daniel Stefanski pointed to the spot, allowing Giroud to sweep home his 100th goal for the club in confident style.

The Gunners seemed reluctant to kill off the game, though, and Gordeychuk got another goal back with 23 minutes left, blasting high into the net from point-blank range after Ospina had saved Ivanic's header, with the visitors' defence asleep.

Aleksandr Volodko shot high and wide four minutes later with the goal at his mercy, and Ospina had to get down to deny Igor Stasevich at the near post, but Arsenal survived the late onslaught to claim their first away win of the season and there was even time to hand Marcus McGuane a debut off the bench.