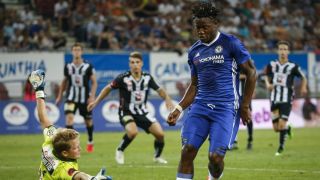 Chelsea forward Michy Batshuayi admits he has been buoyed by the winning mentality at his new club.

The Belgium international joined the London club from Marseille this month on a five-year deal for a reported fee of €33.1million, and scored twice in a behind-closed-doors friendly with Atus Ferlach this week.

Chelsea endured a dismal campaign in 2015-16, failing to win a major trophy and finishing 10th in the Premier League, just a year after winning the competition under Jose Mourinho.

But Batshuayi is in no doubt that belief is growing over their prospects of a title tilt under new manager Antonio Conte.

"It feels fantastic to be here, it's a childhood dream for me so I'm very happy," he told the club's monthly magazine.

"It's a magnificent feeling. Just being at the training ground for one day I can see it's very big and you feel you've joined a club that really want to win. Everything is new and that is exciting.

"It's a great opportunity. Conte is a manager who works very hard and likes people to work hard for him as well. I am very pleased to come and play for him here at Chelsea."