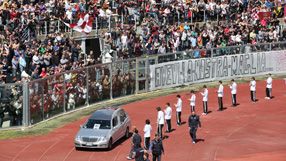 The Italy international was extremely close with his former team-mate, who suffered a heart attack and died during Livorno's Serie B clash at Pescara last weekend, and has been the spearhead behind "Udinese per la vita", a fund to provide a life-long pension for Morosini's severely disabled sister.

Morosini's funeral took place in his home town of Bergamo on Thursday and when his body arrived at the church on Tuesday evening hundreds of fans from local club Atalanta greeted the hearse with banners and flags, as well as a long applause.

"Mario was like a brother to me," Di Natale said on Monday. "He was a great guy who suffered a lot, and lived for his sister [Maria Clara]."

All Serie A games were postponed last weekend as a mark of respect for Morosini and as action resumes Di Natale suggested the season is too gruelling, saying he considered retiring last season due to his inability to recover properly after matches.

"We need to avoid playing matches to close together... I've been saying it for a long time, and have spoken about it often with our club doctors," he said.

"I keep saying this to doctors and coaches... our health has to be safeguarded."

While fourth-placed Udinese travel to Verona to face Chievo, third-placed Lazio take on an in-form Lecce at the Stadio Olimpico on Sunday).

Both clubs have been heavily implicated in the recent "calcioscommesse" match-fixing scandal, and last week Cremonese defender Carlo Gervasoni claimed that 400,000 euros was spent to "manipulate" last season's match between the two clubs in Puglia, naming Lazio's Stefano Mauri as a key figure in the fix.

The weekend's big game takes place in Torino on Sunday, where fifth-placed Roma take on table-topping Juventus, hoping to put the brakes on their old rivals' title charge and close the four-point gap between them and city rivals Lazio.

Juventus lead AC Milan by a point at the top of Serie A, but with Massimiliano Allegri's side favourites to beat mid-table Bologna at the San Siro earlier that day, Juve could find themselves two points behind at kick-off.

"I think it will be a difficult match, like the ones against Milan and Udinese. It's about the three points, like all the others," said Roma midfielder Marquinho.

Hot on Roma's heels are Inter Milan and Napoli, both on 48 points, with Inter travelling to relegation-threatened Fiorentina and Napoli hosting Novara, who look certain to go down.