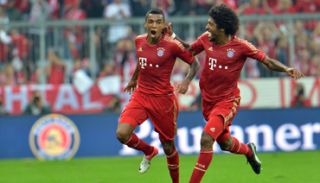 The Brazilian Football Confederation (CBF) wanted Dante and Luiz Gustavo to be available 14 days before the Confederations Cup, as stipulated by the rules of world football's governing body FIFA. The eight-team tournament starts on June 15.

"We were forced into this step," Bayern chief executive Karl-Heinz Rummenigge told a news conference. "We tried to find a solution with FIFA and the German FA - the situation is unpleasant for us.

"We had the impression some sort of psychological pressure was put on the players in that it would be the end of their international careers if they did not report on time. I find that absolutely unacceptable."

Dante has had an outstanding campaign in defence since joining Bayern from Borussia Monchengladbach at the start of the season.

"The German FA has made a mistake in its planning," added Rummenigge, referring to the timing of the final in Berlin and its clash with the Confederations Cup training period. "The calendar is overloaded.

"It would have been inhumane not to let them go and that is something we are not at Bayern. The Confederations Cup has a meaning in Brazil that we cannot imagine."

Club-versus-country battles used to be a continual problem but have been reduced since the introduction of a co-ordinated international calendar, drawn up by FIFA after consultation with teams and national associations.