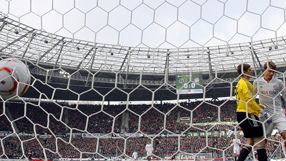 With Bayern in fourth position and seven points adrift of the second spot that earns automatic Champions League qualification, a dejected Rummenigge said the bad run had to end immediately.

"This is the absolute low point of the season," he told reporters. "We've just had eight catastrophic days."

The victory gave Hanover 47 points and briefly took them to second place before Bayer Leverkusen went back above them with 49 points by defeating VfL Wolfsburg 3-0 in the late game.

After a league defeat by leaders Borussia Dortmund last week, Bayern also lost to Schalke 04 in the German Cup semi-finals in midweek, leaving the Champions League as their only realistic chance of silverware this season.

"We came here to win but the way we lost today was just so painful," said former Bayern and Germany striker Rummenigge.

Hanover scored twice before Arjen Robben pulled one back in the 55th minute. Sergio Pinto then made sure of the home team's victory with a long range effort that slipped through keeper Thomas Kraft's fingers.

"We are all bitterly disappointed but we have been around long enough to take a night digesting it," added Rummenigge.

"I do not think anyone will sleep tonight. We are in a situation where everyone at Bayern Munich is very concerned."

Bayern host holders Inter Milan this month in the return leg of their Champions League last-16 tie after winning 1-0 in Italy.