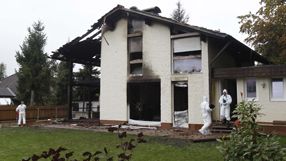 "Following the investigation... the Munich prosecutor's office assumes the accused intentionally set the house on fire shortly after 00:05 (local time) at night," it said in a statement.

If found guilty he could face a jail sentence of between one and 15 years, the prosecutor's office said, adding Breno had to pay one million euros in damages for the house and 5,000 euros for a damaged garage of a neighbouring building.

The 22-year-old Brazilian, who has hardly featured for Bayern this season due to a string of injuries, spent 12 days in police detention at the start of the season and is out on bail.

The talented Breno, who joined Bayern as an 18-year-old and had high hopes of becoming their defensive anchor, has so far failed to earn a starting spot.

He was remanded in custody on September 24 after he being suspected of playing a role in a fire that destroyed his Munich villa while recovering from injury. His family was out of the house at the time.

"The accused who had consumed alcohol at the time used several lighters and possibly some fire accelerant and lit objects around the house," the Munich prosecutor's office said.

The news comes just hours before second-placed Bayern Munich play leaders Borussia Dortmund away in a match that could go a long way to deciding the Bundesliga champions.

Bayern are also in the running for the German Cup and the Champions League.