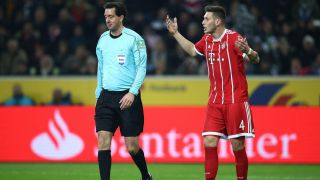 Bayern Munich defender Niklas Sule has questioned the decision of referee Manuel Grafe to award Borussia Monchengladbach a penalty that proved crucial to their 2-1 victory over the Bundesliga leaders.

Gladbach were awarded the spot-kick 38 minutes into an enthralling encounter at Borussia-Park, when Thorgan Hazard flicked the ball up towards the arm of Sule, who did his best to avoid contact.

Despite Sule's protests, and use of the VAR system, the penalty stood - Hazard stepping up to convert, with Matthias Ginter doubling Gladbach's lead on the stroke of half-time.

Arturo Vidal pulled one back for Bayern with just over 15 minutes remaining, but the visitors could not salvage a result as Jupp Heynckes' five-match winning streak in the Bundesliga came to an end.

"I touched the ball with a finger, if that's a penalty then that's sad," Sule, who has impressed for Bayern since his move from Hoffenheim, told Sky.

"That he awards the penalty, it is not understandable for me. How he decided that is questionable.

"We had more of the game, we dominated, but lost it in the space of five minutes. It's a shame that we lost here. But we'll continue looking forward."

Jupp : "We lost the match in the first half. We upped the tempo in the second and all the action was on one goal. But it wasn't enough." November 25, 2017

Bayern's defeat means that their lead at the summit of Germany's top flight has been cut to three points courtesy of RB Leipzig's 2-0 win over Werder Bremen.

Meanwhile, it is a fifth victory in seven Bundesliga fixtures for Dieter Hecking's Gladbach, and key man Hazard was quick to highlight a clinical and resilient performance.

"We feel very good. We started well, we know when we play against Bayern we need to defend all together, and we did," the Belgian said.

"We need to defend, defend, and we did, and then we missed a great chance in the last minute.

"We all celebrate the victory. In the last few years we've won a few times against Bayern and it's always a great feeling.

"We want to continue like this. If we work together, it is possible to get more wins. First we celebrate the big victory, and after that think about the next game."